I think it is widely accepted that there has been some degree of power inflation through the march of D&D editions, with hit points and many other stats increasing. Ability use limitations have also decreased or gone away. For example, the humble TSR D&D magic-user or wizard got to prepare one first level spell per day, and after it was used no more spells could be cast until the next day. Compare that with the at-will magic missiles D&D Next and at-will Pathfinder cantrips. 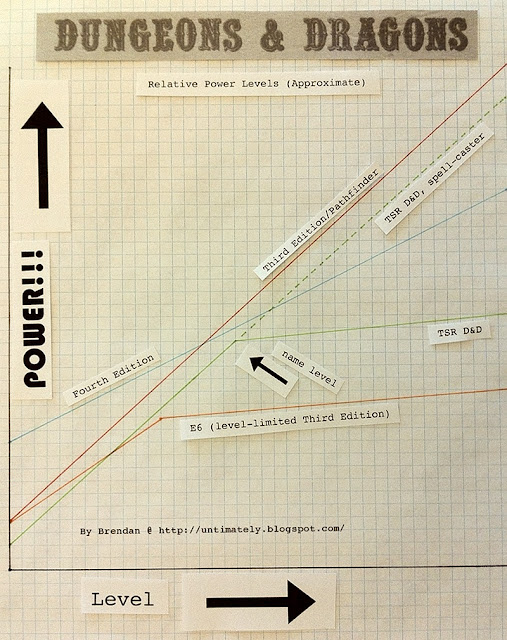 In any case, I’m not saying that any of these power curves are objectively better or anything like that (though I do personally prefer lower power games in most cases), but I thought that a graphical visualization might make it easier to communicate the ideas. Yes, in reality the power levels do not increase so linearly (for example, see how access to certain spells changes the nature of the game). But I think the general idea of the graph above, if approached abstractly, is more or less correct.

Some other notable changes are how TSR D&D has a phase shift around ninth (“name”) level, after which power accumulates more slowly (other than for magic-users, who continue to amass large numbers of spell slots). Third Edition largely did away with the phase shift, allowing hit dice and other abilities to progress until the end. Fourth Edition, chasing the “sweet spot” of levels 5 through 10 in traditional D&D, starts out much more powerful, but ends up weaker (by some comparisons).

Just as a thought, perhaps something like a logarithmic power curve would be interesting? In other words, a way to accumulate power indefinitely (this is an important motivator in the game), but at a slower and slower pace. E6 comes closest to this, but the resolution of power accumulation above sixth level is rather crude (one feat every 5000 XP), and feats also don’t model many kinds of advancement very well.