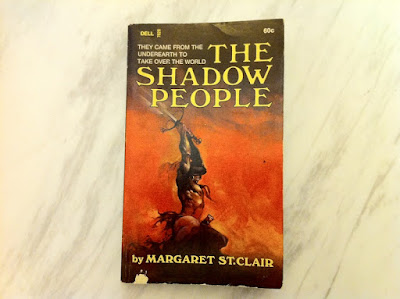 This is a strange little book. It’s a mix of creepy urban fairy tale and paranoid 60s counterculture novel, terrified of the encroaching police state. It’s set in Oakland, on Telegraph Avenue. Everyone at Cal is studying physical education and criminology due to the wave of urban crime. The main character Dick Aldridge (who works for a “hip newspaper”) sets out looking for his missing girlfriend Susan.

As a novel, I can’t say that The Shadow People is very good. Important characters show up by coincidence with no explanation. Setting details are dropped with extraordinary specificity by characters that don’t seem like they should know such things. I never did much warm to Dick or Susan; they don’t feel like fully-formed characters and I never found myself really caring what happened to them.

That being said, there’s lots of interesting inspiration to be taken from the middle section on the underearth; for example: “There is always a water barrier between our world and Underearth” (page 33). I also like the take on faeries. Elves are described as small and boneless, and are malicious, somewhat stupid creatures, with countless taboos. They hate metal that comes to a point. They also don’t like nudity, because “it’s too much like the light” (page 124).

The Secret Commonwealth by Robert Kirk is mentioned several times. I have a copy of the wonderful recent NYRB edition which I highly recommend. From the NYRB description:

Late in the seventeenth century, Robert Kirk, an Episcopalian minister in the Scottish Highlands, set out to collect his parishioners’ many striking stories about elves, fairies, fauns, doppelgangers, wraiths, and other beings of, in Kirk’s words, “a middle nature betwixt man and angel.” For Kirk these stories constituted strong evidence for the reality of a supernatural world, existing parallel to ours, which, he passionately believed demanded exploration as much as the New World across the seas. Kirk defended these views in The Secret Commonwealth, an essay that was left in manuscript when he died in 1692.

This is clearly the tradition that St. Clair is drawing from. The entire text of Kirk’s book is available for free on the web, but I find that version rather unpleasant to read and much prefer the hard copy. I had read bits and pieces of The Secret Commonwealth before, but finishing The Shadow People prompted me to go back and read the whole thing (I also mentioned The Secret Commonwealth recently, regarding elf height).

There’s a bit of the Orpheus legend woven into The Shadow People also (Dick going down to the underearth to rescue his girlfriend). The gray dwarf’s plan is just so twisted that I want to base an entire dungeon area around it. Overall, The Shadow People is probably only of interest to Appendix N chasers, but I’m glad I read it.

4 thoughts on “The Shadow People”