Before I can proceed further with my Adventurer Conqueror King System setting, I need some actual geography. Note that I’m a “learns best by teaching” kind of guy, so don’t take any of this as gospel. This is just a record of what ended up working for me. I would love to hear about different methods that work for other people.

I was playing around with generating random terrain with Hexographer, and one of the areas that stuck with me was this island: 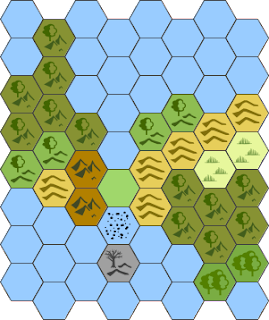 So I decided to use this fragment as a portion of my 24 mile per hex “campaign level” map and my first region. It’s 8 by 8, so that’s one sixteenth of the entire campaign map. I have some ideas about the surrounding area, but I’m not going to worry about it at this point. The fact that this is an island helps somewhat also; it is unlikely that the PCs will accidentally wander too far afield near the beginning of the campaign (Trollsmyth took a similar approach in his hex mapping series). It also means that PCs can either begin as natives or as victims of a shipwreck.

I really like this particular map because it has two major sections with a nice small choke point in the middle. I’m envisioning those connective lowlands as the center of civilization on this island with deep, forested wild mountains to the east and more wild interior to the west past the barrier of the rocky mountains. Flipping the assumptions of Keep on the Borderlands, I think the mountains will contain chaotic border forts (like the gates of Mordor, but smaller scale) protecting the western interior from the settled lowlands. In addition, other lawful settlements will be scattered around the edges of the island, much like the way settlements hugged the shore of Ancient Greece. Communication between the lawfuls will be by short range sea vessels, but more on that in later posts.

To proceed, I need to zoom in on that map and translate it to 6 mile hexes. The Welsh Piper has some wonderful hex templates that can be used with Hexographer, but unfortunately they assume 25 mile and 5 mile hexes (thus 5 subhexes per superhex), which is not compatible with the dimensions I am using. So this is what I did to make sure that the maps line up at different scales.

I started by marking the center of the 24 mile hexes using an arbitrary hex icon that will go away at the end. I chose volcano hexes because they stick out. All hex centers should be equidistant and separated by three hexes in any direction. To see why I placed the centers where I did, check out this picture from my previous post. 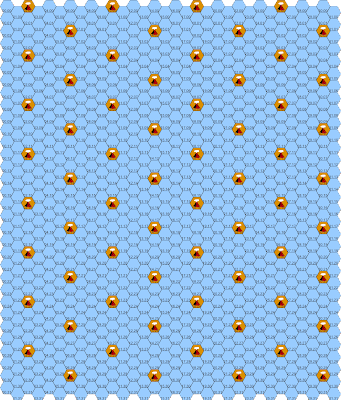 Then, I grew the terrain type outward one level: 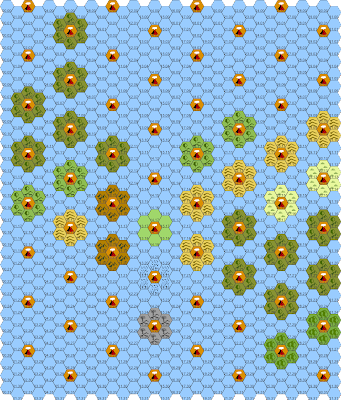 After that, I filled in the rest of the hexes that would be entirely contained in any of the 24 mile hexes. The remaining gaps between them are liminal hexes that could go either way: 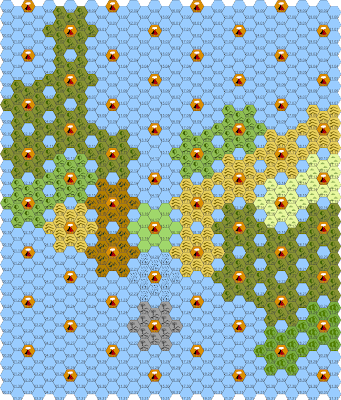 Contiguous terrain of the same type is then connected and the 24 mile hex center markers are removed: 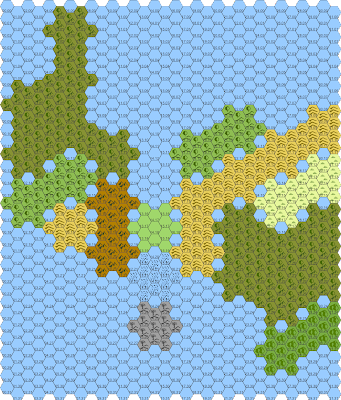 Finally (for this post, at least) we have the “filled in” terrain, with the beginnings of some local variation: 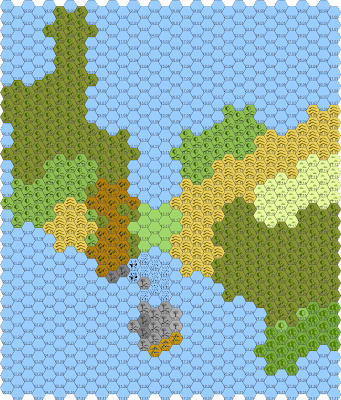 This is still far from complete geographically. You can see that I started to add some details, such as small variations in terrain type at the 6 mile resolution. I don’t plan on creating all the variations prior to play, even just within this single regional map, but as I start to place locations such as domains and dungeons, I’m sure more terrain variation will creep in. My personal rule of thumb is that the majority of subhexes should share the terrain type of the superhex (for example, if the 24 mile hex is forest, at least 7 or 8 of the contained 6 mile hexes should also be forest). Exploring this geography also finally led me to a setting name, which I will reveal in the next post.