Grognardling recently wrote about some problems he was having making maps following the guidelines in Adventurer Conqueror King System. Here are the recommendations (ACKS, page 229):

This sounds good, and 6 miles is a good scale for regional maps, but 30 by 40 doesn’t “zoom” well. That is, a small section of the 24 mile scale map can’t be conveniently represented by another 30 x 40 map at the 6 mile scale. The confusion is compounded by the fact that Autarch makes example hex maps available at three different resolutions, and it is unclear how these fit with the guidelines in the book (other than to show the proper way of fitting four 6 mile hexes into one 24 mile hex). Also, the example map dimensions are not 30 by 40.

I would suggest using 32 by 32 rather than 30 by 40, as that has a number of pleasant mathematical properties (this should not be surprising, as all of the numbers turn into powers of 2). A 32 by 32 hex map at the 24 mile scale divides evenly into 4 by 4 (16 total) sub-maps which can each be represented as a 32 by 32 hex map at the 6 mile scale. Thus, it is obvious how to create zoomed-in maps with added detail for any particular region. 30 by 40 yields 1200 hexes, while 32 by 32 yields 1024 hexes; the two are thus approximately the same area (certainly close enough for tabletop RPG purposes). 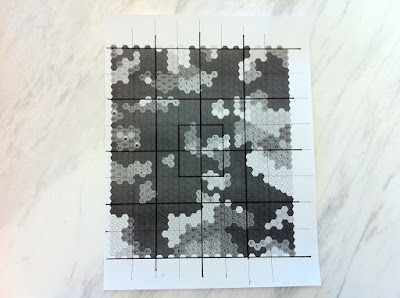 Example 32 by 32 region map at 6 mile per hex scale (large sharpie hexes correspond to individual small hexes on the campaign map above): 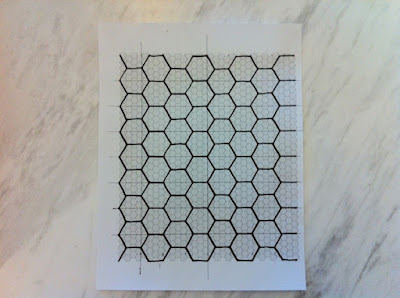 I was going to wait and post my thoughts on the ACKS setting guidelines all at once, but I found that it was taking me a while, so I’m going to do it in parts instead so that I can maintain momentum.