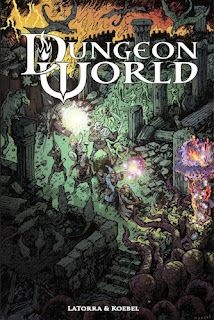 The weapons system in Dungeon World is perhaps the best (for my purposes) that I have seen in any published RPG. It uses a tag-based system to distribute effects between the various weapons. Thus, they become distinctive while offering interesting trade-offs. Best of all, it looks like it could be dropped, unmodified, over a flat d6 or class-based damage system in D&D. Dungeon World itself assumes class-based damage.

It’s not perfect, as there are some items that are just plainly suboptimal other than cost (such as elven arrows versus normal arrows), and I’m never satisfied with cost being the main differentiator because it is not really much of an obstacle in a game about treasure hunters (DW is by assumption less coin-heavy than traditional D&D though, so maybe it works there).

Below I have reproduced the DW weapon rules, since Dungeon World is creative commons licensed. Hence the legitimacy of this cut-and-paste job. Thanks to Adam and Sage for making their work available in this way. In the published book, this material is on pages 324 through 326.

For other weapon systems that try to approach the problem similarly, see:

These are general tags that can apply to just about any piece of gear. You’ll see them on armor, weapons or general adventuring tools. Applied: It’s only useful when carefully applied to a person or to something they eat or drink.

Weapons don’t kill monsters, people do. That’s why weapons in Dungeon World don’t have a listed damage. A weapon is useful primarily for its tags which describe what the weapon is useful for. A dagger is not useful because it does more or less damage than some other blade. It’s useful because it’s small and easy to strike with at close distance. A dagger in the hands of the wizard is not nearly so dangerous as one in the hands of a skilled fighter.

Weapons may have tags that are primarily there to help you describe them (like Rusty or Glowing) but these tags have a specific, mechanical effect.

Weapons have tags to indicate the range at which they are useful. Dungeon World doesn’t inflict penalties or grant bonuses for “optimal range” or the like, but if your weapon says Hand and an enemy is ten yards away, a player would have a hard time justifying using that weapon against him.

The stats below are for typical items. There are, of course, variations. A dull long sword might be -1 damage instead while a masterwork dagger could be +1 damage. Consider the following to be stats for typical weapons of their type—a specific weapon could have different tags to represent its features.