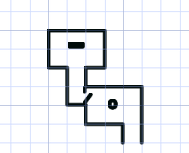 During the previous Vaults of Pahvelorn session (February 3), there was another PC death. In fact, it came perilously close to a TPK. The setup was as follows: there were two chambers, one external (pictured to the south in the map) and one internal. The external room was a makeshift shrine to demonic invaders and was guarded by several fanatical savage worshippers and a priest dressed in demon-lookalike armor. These foes were dispatched quickly but without great stealth.

Following that fight, the party went through the door leading to the inner chamber, and encountered a black armored demon warrior (actually, these creatures have armor as skin, much like an exoskeleton). He was positioned behind a heavy table on the northern side of the room.

Both sides were aware of the other, so there was no need to check for surprise. We went directly to initiative, which the black armored demon warrior won. I asked the players where all the PCs were to confirm that no characters had stayed behind in the previous room, and they verified that everyone was in the 10′ x 20′ hallway leading to the chamber. The demon warrior then discharged an energy weapon, which was 4d6 area effect damage (save versus spells for half).

All PCs and retainers were in the weapon’s area of effect. The damage dice came up 16 in total, so even those that made the save still took 8 damage. The PC Drona (fighter 3) was killed, as were two retainers (Eraria’s apprentice Genk and Drona’s retainer Gillim). Given that this was combat damage that reduced them to 0 HP, the various characters also got the standard death saving throw that I use to determine if 0 HP means true death or just unconsciousness, and those three mentioned above all failed that save as well (if I recall correctly, Eraria and a few other characters were also reduced to 0 HP, but made their death saving throw and so were successfully revived after the combat).

Session as recounted by the player of Drona:

The party returns to the barrow, which looks to have been fortified since their last visit. Tarvis and Darulin foolishly step into a snare trap, and the party are ambushed in the entry way. They make quick work of the savages that attack them, and charm their leader. The party makes their way into the barrow, led by the charmed man. Entering the second level, the party is ambushed once more. They make short work of the fellows and continue South. Beyond that path leads to a room full of more savages. A sleep spell gets rid of most of the group, and Fitzwalter gets rid of their leader. Drona and Gillum run the rest of the sleeping fellows through. Beyond the final door is a short corridor leading into a small room. At a desk sits a demon, similar to tangle. He shoots the party with a crazy magical crossbow. DEAD!

Final thoughts. Engaging in a frontal assault robbed the party of potential surprise. Also, approaching in a tight formation exposed everyone to the demon’s weapon.