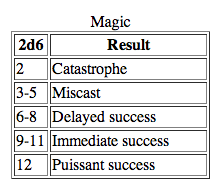 That 2d6 fantasy game began as a variant spell casting system for plain old D&D. As much as I like that complete system, I still think a 2d6 variant for the standard magic-user would be useful. Jeff has already done the heavy lifting, but here is some further discussion and systematization.

For adjudicating the various levels of success, consider the following guidelines. For catastrophe (2 or less), some effect should occur that is approximately as negative to the caster (or positive to the caster’s enemies) as would have occurred had the spell gone off as expected. A backfire (doing full damage to the caster) or the summoning of a hostile creature rather than an ally are classic examples. Miscasts (3-5) should lead to some minor inconvenience that is thematically consistent while achieving none of the intended goal. Delayed success (6-8) may also be interpreted as immediate but reduced. Immediate success (9-11) is casting as normal, with no adjustments. And finally, puissant success (12 or higher) could have extra duration or maximum damage. I don’t think tables of exact results are needed for impartiality; a player should know the level of danger by inverting the potential benefit.

The following is a table showing the chance of 6+ (delayed success or higher), by magic bonus (which is a proxy for class level) and spell level (which is a proxy for magic difficulty). The first column (with the plusses) is the bonus, the first row (with the minuses) is attempted spell level. Thus, for example, a character with a +4 magic bonus (magic-users of level 7 or higher), has a 58% chance (6+ on 2d6, +4 from the magic bonus and -5 from the spell level) to be able to cast a fifth level spell with partial success (full success, consulting the magic table above, requires a 9+). All percentages are rounded, and taken from anydice.com (click on the “at least” button).

This system has the following benefits, in my opinion. No stupidly large number of spell slots to fill for higher level magic-users. Vance’s spell casters were not able to cram more than a few spells into their consciousnesses. Also, it allows lower level magic-users to cast higher level spells with a decreased chance of success even more elegantly than some previous Vancian variants I’ve experimented with. The magic bonus M along with the fivefold casting result chart replaces the original spell slot chart. The armor penalty to casting obviates the need for armor restriction in a finer grained way that other “arcane failure” systems I have seen (light armor makes a character function as if she were 2 levels lower, medium armor 4 levels lower, and heavy armor 6 levels lower).

Those who have been paying attention may notice some similarities with the DCC RPG wizard system. That also uses a relatively smaller number of spells, though more than I have here (up to 16 at level 10). It uses a d20 roll to cast, with caster level as bonus, and a difficulty class of 10 + (2 * spell level). This is nice, but I prefer 2d6 because it makes (for example) the difference in difficulty between a second and third level spell greater than the difference between a first and second level spell. Also, the crit and fumble chances with 2d6 are 1 in 36 (about 3%, assuming balanced modifiers), and they scale up nonlinearly with difficulty.

A minor point: that multiplier of 2 in the casting difficulty class formula for DCC RPG is an indicator of a system kluge. The two parts of the system (class level and spell level) don’t really fit together. The same thing is true of my 2d6 formulation as well, but at least you only see it once per level up (when you potentially recalculate the magic bonus), rather than on every casting check. Further, as casting spells is really all the magic-user gets better at, there’s no real reason not to just change the experience progression so that level 6 is equivalent to the old level 11 or 12. Thus, one might have an experience progression of 0, 5k, 20k, 50k, 100k, 300k. Then magic bonus, class level, and spell level are all on the same scale.

If you’re playing B/X (or a system with comparable intelligence modifiers) feel free to add the intelligence bonus to the magic bonus for purposes of the number of spells that can be prepared (but probably not to the actual casting check, as that would be very powerful). If you want magic to be a bit harder, have the magic bonus increase in steps of 3 levels rather than 2 (that is, level / 3 round up). For extra fortifying play, consider letting starting magic users randomly determine the level of starting spells in addition to the spells themselves (probably good to let them start with at least a few first level spells though). Or might I suggest a grimoire system?

Here are a few more charts of probabilities, to illustrate the dynamics of the system.