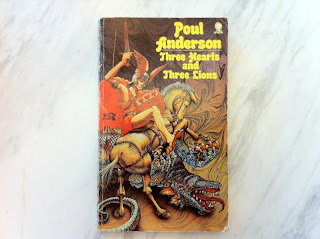 Three Hearts and Three Lions, by Poul Anderson, is one of the core books of Appendix N. In terms of direct influence on D&D, 3H&3L would probably be in any top 10. Within can be found paladins that can fall from grace, trolls that regenerate and must be destroyed with fire, a multi-racial adventuring party, and sorcerers with unseen servants.

As a novel, I prefer The Broken Sword, the other Anderson book that is often held up as influential on early D&D. It has more fully realized characters and a more complete story. 3H&3L reads in some ways like an introduction to a longer tale. That being said, the writing is beautiful, unlike some Appendix N works, and it is filled with wonderful gaming inspiration and fairy tale atmosphere. Holger is also another example of the visitor from another reality as explorer of fantasy worlds.

One of the things that I find most interesting about the various challenges presented over the course of Holger’s quest for the sword Cortana is the fact that, despite being a fearsome warrior, with a few exceptions Holger overcomes most of his foes by cleverness. I don’t want to spoil the details, but the basic idea is that Holger is not trading blows and reducing his enemies to 0 HP (most of the time). Instead, he tricks them, frightens them, uses kryptonite against them (well, not actual kryptonite, but hopefully my meaning is clear). This is how characters can game encounters that are above their level. It works well in the context of a game and it works well in the context of how fairy tales work structurally.

Despite the many tropes of D&D that were drawn from 3H&3L, fairies are notably different than the Tolkienized elves of D&D. They are less sympathetic, for one thing, and have a fascinating Christian gloss, being called Pharisees by mortals. The recent 4E cosmology partakes of Fairy-Land in some ways, through the Feywild and Shadowfell, but the atmosphere is still subtly different. The Feywild is primal nature, and doesn’t quite have the fascinating twilight ambiguity that I like so much about Anderson’s realm of Faerie. Combining the Feywild and the Shadowfell into one thing might approximate the feel, but Fairy-Land is an expression of mythic geography and is thus part of the world (you can walk to it) in 3H&3L. For example, on the lands of Faerie (page 38):

Though the sun was hidden, the night he had feared was not fallen. He could identify no source of light, but saw almost as clearly as by day. The sky was a deep dusky blue, and the same blueness pervaded the air as if he rode under water. Grass grew long and soft, with a silvery hue overlying its pale green; white flowers starred the earth. Asphodels, Holger thought. But how did he know? Here and there he saw bushes of white roses. Trees stood alone and in copses, tall, slim, milky of bark, their leaves the color of the grass. The slow wind blew through them with a tiny ringing sound. He couldn’t gauge their distances well in this tricky shadowless light. A brook ran close by which did not tinkle but played, an endless melody on an alien scale. Phosphorescence eddied white and green and blue over the water.

The Pharisees themselves are not noble savages in silk that are more in tune with nature as elves are often portrayed. Instead, they are dark mirrors. Consider this faerie knight (page 39):

The stranger came over a ridge. He bestrode a tall horse, snowy white, with flowing mane and proudly arched neck; yet the beast was subtly wrong to look at, too long of leg, too small of head. The rider was in full plate armor, his visor down so that he showed no face; white plumes nodded on the helmet, his shield was blank and black, all else shimmered midnight blue.

For sustenance, they take tribute from mortals. The logic of fairy tales mostly obtains, but they are not completely removed from the requirements of mortals. They are also the slavers of the fairies (this can be seen in The Broken Sword as well) and have goblins as menial servants. 3H&3L, page 41:

Faerie seemed a wilderness, hills and woods and uncultivated valleys. Holger asked a much subdued Hugi what its inhabitants lived on. The dwarf explained that they magicked up some of their food and drink, and got some from other realms in the Middle World tributary to them, and hunted some among the weird beasts which prowled their domain. All of them seemed to be warriors and sorcerers, their menial work done by slaves taken from the goblins, kobolds, and other backward tribes. Further questions revealed that the Pharisees knew not old age or illness, but were said to lack souls.

And on the masters of Faerie, along with a great example of an OD&D stronghold encounter (page 43):

The castle gates opened and the drawbridge came down, noiselessly. Trumpets blew again. A troop rode forth with banner and scutcheon, plume and lance, to meet him. He reined in and waited, his hand tight around his own spear. So these were the masters of faerie.

The were clad in colors that seemed luminous against the twilight, crimson, gold, purple, green, but the hue of each garment shimmered and flickered and changed from moment to moment. Some wore chain mail or plate, argent metal elaborately shaped and chased; others had robes and coronets. The were a tall people, moving with a liquid grace no human could rival, nor even a cat. A cold haughtiness marked their features, which were of a strange cast, high tilted cheekbones, winged nostrils, narrow chin. Their skin was white, their long fine hair blue-silver, most of the men beardless.

The Pharisees are not exactly agents of Chaos, though they do seem quite willing to assist the witch Morgan, if for no other reason than to ease their boredom. Here is Alfric speaking, on page 47:

‘You mortals know not how tedious undying life can become, and how gladly a challenge such as this is greeted. ‘Tis I should thank you.’

I would be very tempted to replace the B/X elf class with a Pharisee class, which would probably be similar to the elf in my recent alternate take on races post. Basically, details as elf, but can be turned as undead of similar HD. Vulnerability to iron as specified. Perhaps limited to a custom list of enchantment and charm spells, drawn from AD&D or Second Edition for variety. I’ve seen the elf done by limiting to druid spells before, but after reading 3H&3L, I find the enchanter archetype more appealing and appropriate.