If you could only keep ten of your printed RPG books, which would you pick? I asked this question a while back on Google Plus, and got some interesting answers (I also learned about some awesome books, like the Warhammer Realms of Chaos volumes; thanks Zak!). Then recently this TSR versus OSR thread came up on ODD74. I do not generally enjoy false choice hypotheticals, but it did make me recall this exercise, which is sort of an empirical version of the same idea.

I’m going with the following arbitrary conventions, because restrictions are fun. First, it has to be something I actually own and a physical book. Second, the decision has to be based on content not rarity or value (though content can incorporate things like nostalgia value and artwork).

The original list that I posted to G+ was the following: AD&D DMG, the 3 OD&D booklets, LotFP Referee book, S1-4 Realms of Horror, The Guide Book to Taladas, D&D Rules Cyclopedia, and Warhammer Fantasy Roleplay, Tome of Adventure Design﻿. I have changed a few items, but it has remained largely the same.

Also, I know many people think very highly of the core Wilderlands books, and some of them probably deserve placement. I only have them in badly-scanned RPGNow PDFs though, and so I haven’t really spent much time with them. So they are disqualified both for technical reasons (not books) and for practical reasons (I really haven’t used them much).

So how do the TSR and OSR camps fare?

Also, when I was doing this, I couldn’t actually keep it to only ten, so I included some runners-up also. The runners-up are about evenly divided between “original” material and OSR material.

This is not just an idle exercise, as I might be spending a few months in London at the end of the year, so I might actually have to pick a few books to take with me. 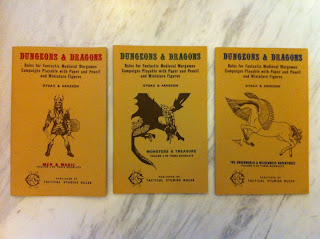 I, II, III: Dungeons & Dragons. Suggestive rather than prescriptive. By the time we get to AD&D, we can already see all the tendencies of modern games in proto form. Here, things are still wide open. And the systems are really elegant, if you can get past the bad organization. Concise though, so still faster to learn than most bigger games. 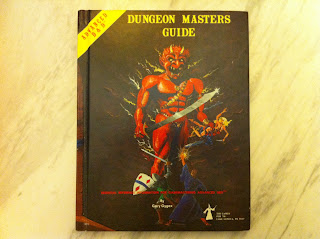 IV: Advanced D&D Dungeon Masters Guide. Gygax’s magnum opus. I believe this volume needs no introduction. I don’t even particularly like AD&D as a complete system, and this still would take a place near the top. 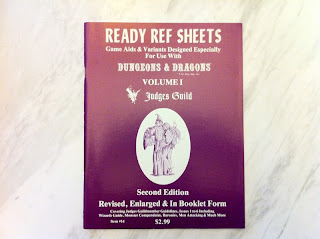 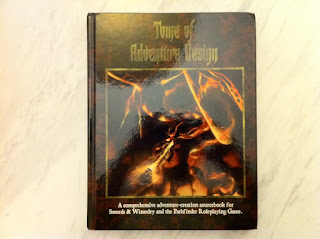 VI: Tome of Adventure Design. Random tables for just about everything, and lots of philosophy about how to use them. Another random monster generator. More tools for dungeon generation. There is not really anything else of this scope and quality available, even considering everything published to date. 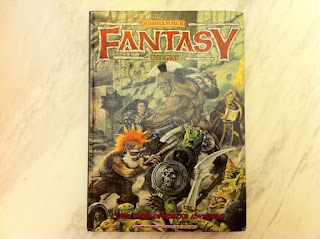 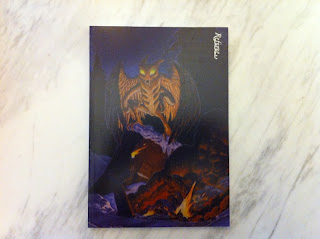 VIII: LotFP Grindhouse Edition Referee Book. Probably the best thematic book on refereeing. Fits my “suspense movie” style perfectly. If we’re counting boxed sets as single items, of course the entire Grindhouse Edition would go here, but this is the standout booklet from that set for me. There is a free no-art PDF of the Rules & Magic book. 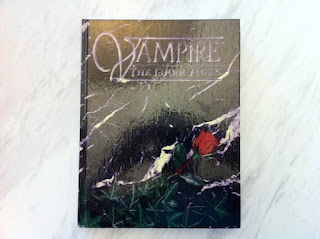 IX: Vampire: The Dark Ages. What is a Storyteller book doing in the top 10? I have enough D&D mechanics in my head that I don’t really need anything to play, so what I want in books is primarily inspiration. This book is beautiful, and has excellent atmosphere. I would probably still use D&D type mechanics. Dark ages Transylvanian dungeon crawls. 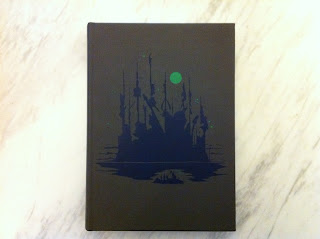 X: Carcosa. Unapologetic dark imagery, one of the best examples of a sandbox, random cthuloid monster generator, random robot generator, random tech artifact generator. This is how it’s done. It’s only missing a sample town. Perhaps the most attractive bound RPG book I own, too. Rich Longmore art. 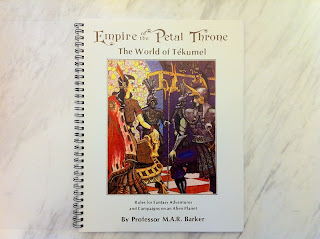 Runner-up I: Empire of the Petal Throne. Honestly, this should almost certainly be higher on this list. It isn’t only because I don’t yet feel knowledgeable enough about EPT to have much intelligent to say about it. I am more interested in EPT because of its system, not the setting, which I gather is odd. 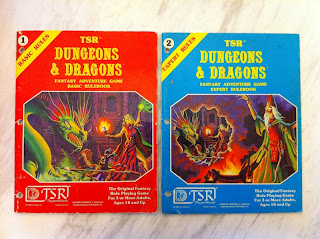 Runners-up II, III: B/X D&D. In many respects, these two books make up my favorite iteration of the game. So why aren’t they in the top ten? Well, the 3 LBBs are already there, it’s hard to justify both, and the LBBs have more (though in less detail). For example, there is no stronghold resident generator in B/X. If B/X was one book, it might replace Vampire in the top ten. 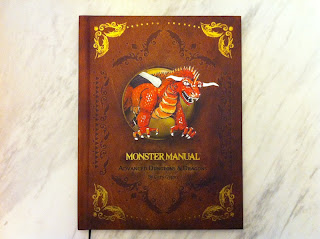 Runner-up IV: Monster Manual. If Monsters & Treasure from the original box didn’t also have treasure, the Monster Manual would probably win. It has all the important iconic monsters, though I still sort of prefer the open ended nature of the OD&D box monster write-ups. 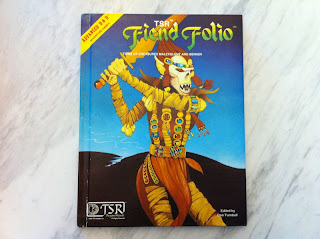 Runner-up V: Fiend Folio. More weird fantasy and less mythology than the Monster Manual. An excellent example of what might live in an alternate cosmology setting. Russ Nicholson art. Elemental princes of evil. Githyanki and drow. Grell. Killmoulis. Slaad. Man, maybe this should be in the top ten. The encounter tables in the back are also almost a complete setting. 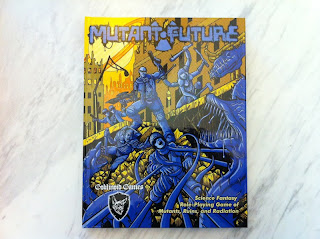 Runner-up VI: Mutant Future. I’ve never seen the original Gamma World, but I gather Mutant Future is more compatible with D&D, which is how I would want to use a post-apocalyptic game anyways. I like MF more than Metamorphosis Alpha. One of the real strengths of the OSR is the off-genre offerings. 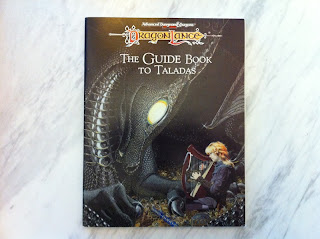 Runner-up VII: The Guide Book to Taladas. From The Time of the Dragon setting (and see here). One of my favorite settings; more original and less sprawling than most TSR settings without being batshit crazy like Dark Sun (which I also like). And illustrated by Stephen Fabian (linked pictures are just to give you a sense of his style; they are not from this book). 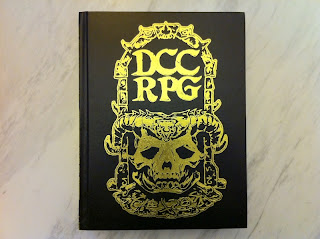 Runner-up VIII: Dungeon Crawl Classics RPG. The style and attitude of this volume are just amazing, and there are lots of rules ideas that could easily be poached, like the dice chain and variable attack bonuses. So what that half of the content is spell tables. Erol Otus art. Pete Mullen art. I’m usually not a fan of such physically cumbersome books, but DCC caries it. 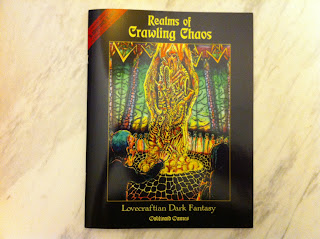 Runner-up IX: Realms of Crawling Chaos. This is a great supplement, very tightly written. A bit too much overlap with Carcosa to have both in the top ten, but very worth picking up, especially for the Reading Eldritch Tomes and Random Artifacts appendices. The psionics section is also good. Most of this book is reusable as open game content, too. 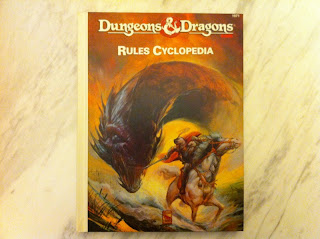 Runner-up X: D&D Rules Cyclopedia. With both OD&D and B/X in the running, there is no way that I could include the Rules Cyclopedia too, but it still deserves a mention for the breadth of material that it covers, even if pretty much all of the interior art is bland. The hex maps are great too, but but the book lacks guidelines on hexcrawl play. 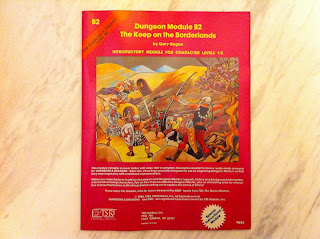 Runner-up XI: B2 The Keep on the Borderlands. I feel an example of town, wilderness, and dungeon all together would be good to have (though the wilderness in B2 is not really fleshed out). Perhaps this should be higher; I’m not sure. B2 also has lots of good referee advice that probably should have been in the core rulebooks.