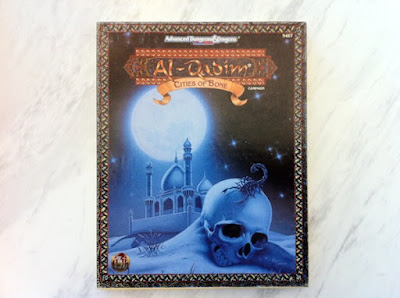 Cities of Bone is a minicampaign associated with the Al-Qadim setting. I just recently picked up a used copy because I have a weakness for necromancy themes. I don’t own any other Al-Qadim products (though I did own Arabian Adventures at one point), so I’m not sure exactly how it fits in, but it seems somewhat self-contained. I love the idea of a desert land strewn with ruins, though if I ran this myself I would probably make it more culturally neutral rather than use all the custom classes and spells (which are mostly detailed in other products anyways).

The scope of the product seems almost perfect for a sandbox (see what I did there?), though the organization is poor and how the various locations tie together is not clear. There is enough material to keep players occupied for a while while still begging for referee customization. There is no pretence of Cities of Bone being a complete setting. The snippets of history and background that are provided support the adventuring sites rather than overwhelming them with trivia. 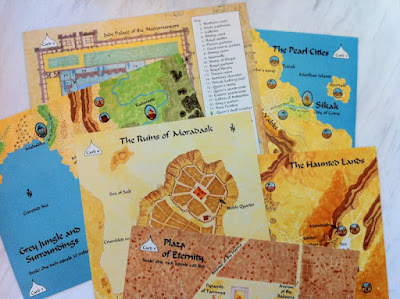 The set feels strangely unfinished, as if it was rushed out the door. The Adventure Book has no proper cover, though it looks like it should have one (it’s just saddle-stapled paper, like the interior of one of the old modules with detachable covers). Despite that, the production values are relatively high, though the overland map cards do not connect (that is, they seem to be three random samples of the Zakhara map, which I only discovered by looking up a full map on the Internet).

The interior layouts are gorgeous though, using two-tone gold and black borders (I bet they just reused that work from Arabian Adventures). There are six color full page cards, and all of them have (attractively rendered) dungeon maps. There is also a poster sized map which reproduces the Jade Palace of the Necromancers and, while pretty, would be entirely useless during play. Oh, and an eight page saddle stapled Monstrous Compendium style NPC book (one NPC per page). I may not be doing a good job making it clear that I actually like this set, despite the general 2E decadence. 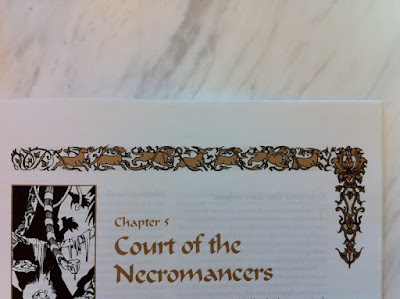 Second Edition products are afflicted with a fetish for standardized presentation, and Cities of Bone is no different. It feels like everything starts with an official template for required information. For example, in the Campaign Guide (32 pages), every area has the following categories: Ruler, The Court, Population, Features of the City, Major Products, Armed Forces, Major Mosques. Even if it’s a ruin which is occupied by undead and obviously doesn’t need such schematic presentation. Example: Ysawis, City of the Dead; Population:

More than 5,000 animated skeletons and zombies lurk in and around Ysawis. All were animated by the necromancers. The number grows continually, for each day, Sumulael and Kazerabet add 20 to 30 more to the population.

Etc. This reminds me of the Monstrous Compendium format where every page must have a magic resistance field (even if it is usually “Nil”), a special attacks field, a habit/society section, and so on. This inflexibility is a major weakness of Second Edition, but is not fatal (just slightly annoying, as it feels like everything is padded). There are some nice sections in the beginning of the Campaign Guide about the dangers of tomb robbing (diseases) and some details about tomb specific dungeon dressing. 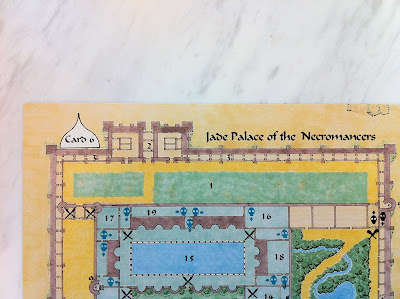 The bulk of the product’s text is in the 64 page Adventure Book, which is basically a collection of six modules that share a theme but are otherwise unconnected. None of the adventures are spectacular, but all are serviceable and have enough background to make them interesting sandbox locations. One of them punishes the PCs for recovering any treasure but provides a “story reward” of 50k XP if the party makes it in and out (there are hints about how to do this).

The longest of the adventures centers on the Jade Palace (pictured partially above) and has palace intrigue with five different powerful NPCs that players can ally with, which is pretty interesting and nonlinear (especially since it is set in a ruined city full of undead and also has a stuffed tiger zombie). As written, there are many railroad elements, but it has potential (and also seems heavily influenced by Clark Ashton Smith’s Empire of the Necromancers). Overall, I can’t unreservedly recommend this box in general, but it has enough elements that appeal to my sensibilities to make it worthwhile to me.

3 thoughts on “Cities of Bone”