Following on my ideas for one page dungeon module prep, I’ve actually put together some materials. That’s 10 pages in the picture below (I printed the Blasphemous Brewery prep sheet double sided because I was able to fit the maps and prompts needed on two sheets). One of those sheets is a table for the effects of the purple lotus. I’m missing zone 2 of Hammers of the God because I haven’t completed it yet. It might need to be two pages; I’m not sure yet. The transfomorph from that module also has its own page because it requires several tables.

I’m in the process of running Death Frost Doom from these sheets. They are working out really well so far. They do take a bit of effort to construct, but if you do it at the same time you are reading the module in preparation, I don’t think the extra time is all that much. I would love to see this sort of play aid generally included with modules. Basically, I think that page flipping should be kept to an absolute minimum. It is a rare case where a session might require more than one or two of these sheets (if players are in a sandbox environment where they could jump in any number of different directions, you might need to have several available, but you will probably not need to actually use more than one or two).

As I said before, I don’t think these are replacements for traditional adventures. Modules, especially good ones, convey a lot of atmosphere with all that extra text. But I don’t want to read that during play, I want to read that before play to have a sense of what the scenario should feel like, and during play I only want the critical details.

I’m still playing around with the form factor. Assuming a single sheet like this works well, but perhaps digest size, printed like a booklet (one sheet of paper folded in half) would work better. That might make the front and back more accessible, and would also allow the sheet to be kept inside my adventure log notebook, which is smaller than 8.5 x 11. Right now I have a binder in addition to the notebook, and it would be nice to only need the notebook. 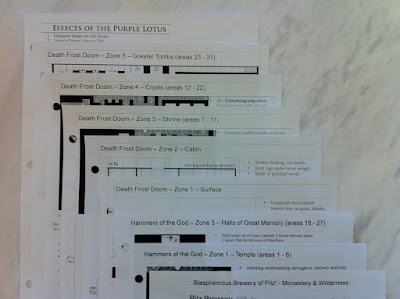