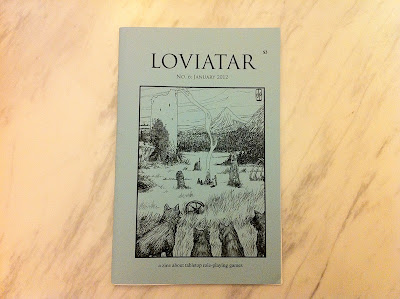 Loviatar 6 has three features: Hex 002 in what I am going to call the Haldane Hexcrawl and two sets of characters for other modern RPGs (Chaosium’s Basic Roleplaying and Vampire: The Requiem).

I’m going to talk about the hex first, as I am primarily a D&D player. This hex feels like it has slightly less content than Hex 001, and it doesn’t have any mechanical innovations like the hex reward from Hex 001. That being said, it does have a very interesting twist with some lycanthropes which can result in some dramatically different outcomes based on player choice. This particular encounter also got me interested in checking out the old basic D&D splatbook Night Howlers (no mean feat). I’m also really digging the small gods vibe. It reminds me of kami from Japanese mythology and Shinto. This is the perfect scale for divinities in a hexcrawl.

There is a gothic (in the sense of literature) undertone to much of Christian’s work. Little tragic vignettes that on the surface seem prosaic or even bland. A pig farmer’s cart. A homestead off the beaten path. What lurks beneath is dark though, and not in terms of monsters (though there are some of those). Instead, the darkness is often human darkness like a crime or a jealousy.

I also love how actions in one hex affect adventuring in other hexes. For example, some entries in the random encounter tables are shared, and if they were defeated before they won’t show up in the current hex. In these hexes there are encounters that I imagine players may not investigate thoroughly (or just miss). In those cases, it would be interesting to keep a running list of “open loops” and periodically update their status. This would mean that the course of the PCs would always have consequences, even if that course entails avoidance or ignorance. Loviatar 7 (which should be making its way toward me as I write this) is entirely dedicated to Hex 003, which I am looking forward too.

I wonder: might we ever see some Haldane underhexes? By underhex, I mean dungeon content of course. I think such a feature would make a great addition to a future issue of Loviatar.

Now a bit about the BRP and Vampire features. Both are essentially collections of modern NPCs detailed for systems I don’t use. However, both ended up being directly useful. The rat breeder in the BRP feature is going straight into my current D&D game. One of the Vampire characters (Terrance specifically) also gave me an idea. I haven’t worked much with explicit themes before in games. Vampire (the game) says it is “about” retaining humanity. But what does that really mean? I would argue that it means finding a way to maintain yourself while in a bad situation, often (but not always) of your own making. Thus, the change from being a human to the drives of vampirism. This parallels how bad choices work in the real world. In more extreme cases, this bad choice is something like getting involved with a criminal organization. Or it could be an addiction that sprung up from just one sampling (because everyone has illusions of control). Once you are in, it is much harder to get out.

I am not generally a theological person, but this strikes me as a good description of evil: short term gain with willful ignorance of longterm cost. The devil always offers power, status, and satisfaction. Temptation. At least to begin with. The true implications only become salient later, both from abstaining or indulging. Encounters with these sorts of consequences would be very interesting, and nicely sidestep common RPG challenges (direct problem solving, mechanical combat). Not that there is anything wrong with the common challenges, but you know what is said about variety.