Justin Alexander (of The Alexandrian) left a comment about boxed text on a Grognardia post that has stayed with me. (I would link to the comment itself, but recent changes to the Blogger comment system seem to prevent such direct linking.) Justin wrote:

(a) clear separation and identification of all the information the PCs should have upon entering a space makes running a module infinitely easier for the GM; and (b) boxed text is an immediately useful way of making that separation while also providing (when properly executed) a useful tool in its own right.

I agree with this, but though boxed text is intended to be information immediately perceived by PCs, it is often cumbersome to read (with literary pretensions), can be quite long, and often does not include items that the referee should be immediately aware of (say, a pit trap). So while it can help (sometimes), it is not a complete or perfect solution.

As an example, consider this area description from the module I am preparing right now, The Pod-Caverns of the Sinister Shroom:

11. SHAMBLING MOUND LAIR: Ropy pillars of fungus grow from ceiling to floor here, ranging from one to four feet in diameter. A young shambling mound grown by the Shroom makes its lair in the back of the chamber, hidden from sight by the many fungus pillars. In addition to guarding the passage, the shambling mound guards a treasure casket, trapped with a poison dart trap (3 darts, 1d3 damage, poison +3 saving throw, attacks as 2HD monster). The casket contains 1200 gp, 10 pps, 1 potion of healing, and a fungus staff. The staff is made of a spongy fungus material that can be looped or folded (it is coiled in the casket). Whenever combat threatens (e.g., a surprise roll is called for) the staff snaps straight for battle and becomes a +1 quarterstaff in all respects. This ability acts as a warning, granting anyone with the staff in hand to be surprised only on a roll if 1. If it is stored in a backpack or other container, it may very well damage the container when it straightens.

That is quite a wall of text to reread in the midst of play. Note that more than half of the paragraph is treasure description. I had already read the module once through, and I remembered that there was a room with a shambling mound, and I also remembered the fungus staff, but I didn’t remember that they were in the same room, that the chest was trapped, or the important entry description (thick ropes of fungus). This was the text I wrote in the margin:

Look at how much easier that is to assimilate quickly. It is enough to remind me of all the important aspects of this area. The bullet list is not a substitute for the detailed prose description (which the referee still needs to read beforehand to get a sense of the overall module). Even a concise paragraph of prose text cannot really be read during the play without breaking the flow of the game. If I had not written those notes, I probably would have to reread the entire paragraph to make sure that I was not forgetting anything important. 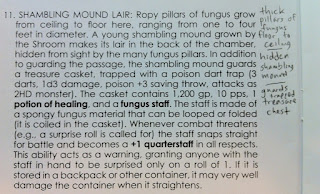 I don’t mean to pick on Matt’s module, I actually highly recommend it. It’s well written and very creative. Pod-Caverns just happens to be the module I am using right now. This is only a suggestion for module writers intended to help make modules easier to use.